The tabs at the top of apple.com have been around for over two decades now.

Looking at the changes over time shows changes in Apple products, priorities, and design. For long-time Apple watchers it also provides a walk down memory lane. 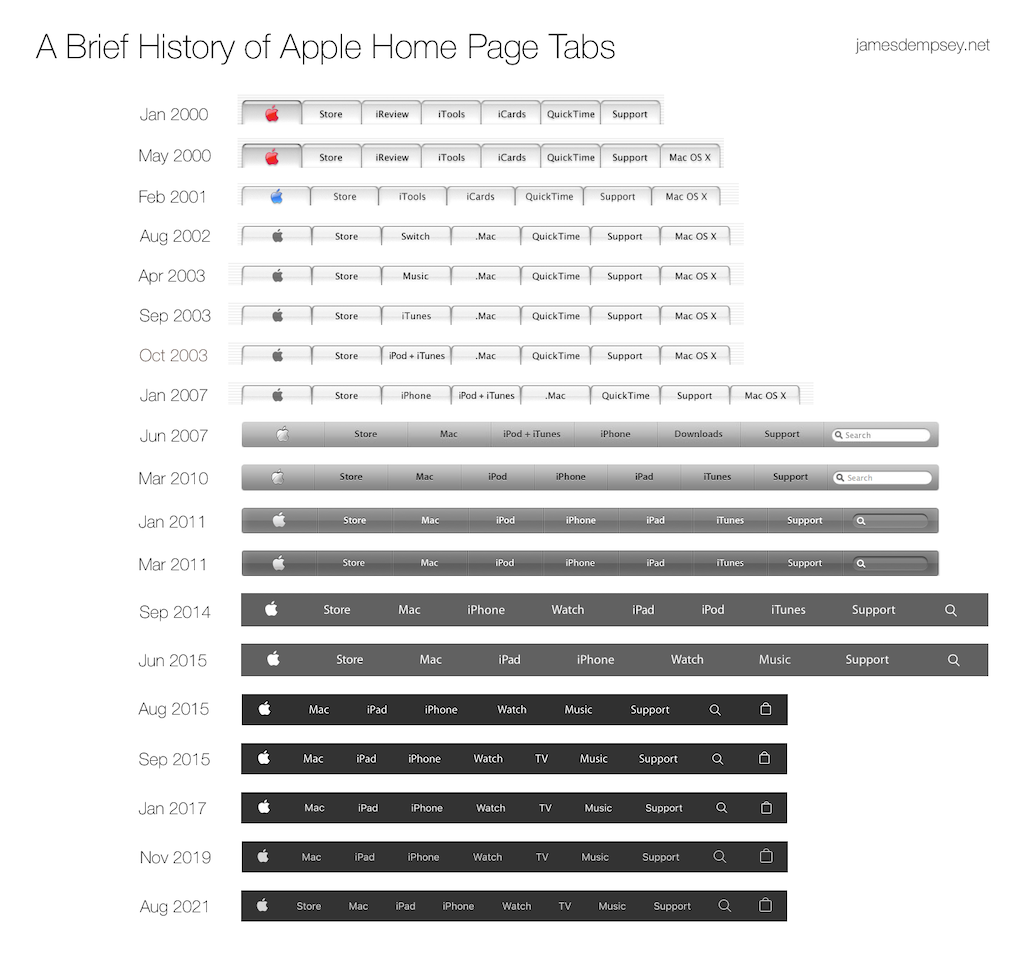 The phrase ‘home page tabs’ itself has become a misnomer as the design has evolved from the original tab styling to a plain, clean navigation menu.

But they were tabs on a tab bar when announced by Steve Jobs at Macworld Expo San Francisco on January 5, 2000:

“We’re adding a tab bar on the top of apple.com. So that we can get viewers more easily and readily to the places they like to go.”

When the tabs were introduced twenty-one years ago they combined elements of two of the biggest Apple announcements of the day.

At that keynote, Apple announced Mac OS X and demonstrated the Aqua user interface for the first time.

Although the first commercial release of Mac OS X would not be until March 2001, Apple fans could get an immediate sampling of the new design aesthetic at apple.com. The top of the redesigned Apple home page included a row of Aqua tabs.

But what was in these tabs?

The revolution was not long-lived however, with KidSafe and iReview surviving less than two years. The remaining services were discontinued or replaced as iTools progressed from .Mac to MobileMe to iCloud. Today, legacy mac.com email addresses are the only remnants of the original set of services.

The other four tabs were direct links to the most visited areas of apple.com.

Two of the tabs have had a lot of staying power—the Apple tab on the far left and the ever-present Support tab on the far right. The QuickTime tab led to software downloads and online video content like movie trailers.

In the second position, the Store tab appeared destined to be as long-lived as the Apple and Support tabs. But then it was removed six years ago, never to be seen again. Or so it seemed…

Like an old friend you haven’t seen in a long while, the Store tab returned to the lineup of the Apple home page tabs earlier this month.

Present from day one, the Store tab lasted for a decade and half before it disappeared in August 2015. At that time the Apple Store became integrated into apple.com product pages and ceased to be a separate site. The Bag icon was added to the far right of the tab bar instead. (Read The Details Here)

But now, the Store tab returns to its former glory as the shopping-focused sidekick of the Apple tab. While purchases can still be initiated from product pages, the restored Store tab leads to a site similar in layout and appearance to the Apple Store app.

Why the comeback? Although Apple did not make an announcement, there are a few likely reasons.

First, from the home page, it’s not obvious where to navigate to make a purchase. A dedicated Store tab makes that very clear.

Second, the store page gives Apple a place to highlight products like AirTags as well as solutions that cross multiple product lines—things that don’t fit logically into the existing tabs.

In retrospect, it is surprising the Store tab did not make its reappearance sooner.

Although the tabs themselves have remained stable for over half a decade, there have been a few stylistic changes along the way.

Most notably, the font changed from Apple Myriad to the system font San Francisco in January 2017.

The original font used in 2000 was Lucinda Grande—the longtime system font of Mac OS X. In June 2007 when the tab bar style no longer mimicked Mac user interface elements, the font was changed to Apple Myriad. This variant of Myriad was used in Apple marketing and was never part of the evolving Aqua design.

The San Francisco font was first used for the user interface of Apple Watch in 2014. Over time all Apple platform user interfaces and marketing have consolidated to use versions of it.

In addition to the font change in 2017, two subtle changes occurred in November 2019. The color of tab bar items changed from white to a light gray. In addition, the icons for Search and Bag became larger.

Six years has passed since the last change to the tab lineup. This is by far the longest the Apple home page tabs have gone without a change to its contents. Previously the longest period of tab bar stability was three years and six months from March 2011 to September 2014, when the Watch tab was added.

With the return of the Store tab, there are now eleven items in the tab bar, the most in its twenty-one year history.

As rumors persist about potential new Apple product lines such as automobiles and augmented reality glasses, will we see another change in the tab lineup soon?

Or as the Store tab reassumes its place in the tab bar pantheon, will this mark the beginning of another era of stability?

Only time will tell what lays in store. •

I’ve been cited as the ‘unofficial Apple home page tabs historian’ in articles at The Loop and Six Colors.  Here are a few past articles on this topic that you might enjoy: