It’s been a busy few weeks with Apple announcements and Backtrace, our new album of iOS and Mac development songs, hitting the Billboard charts. I’ve updated my iOS Device Summary to include the recently announced iPads.

The new iOS devices introduced this fall presented some challenges for the summary chart:

The iPad mini 2 and iPad mini 3 have identical processors and screens. The devices appear on the chart as a single entry, split to reflect the different supported OS versions.

We have not seen a revised iPod touch in two years. With the traditional Apple fall events behind us, it is unlikely we will see a significant update until next fall at the earliest. Since the iPod touch line ends at the A5 chip and the multiple-model iPhones start at the A6 chip, these have been combined into a single row.

Finally, the new A8X chip pushes the number of columns to the limit, so I’ve dropped the ARM chip and the iPhone 3GS and 3rd Generation iPod touch from the chart.

Since the chart is starting to have trouble cleanly representing devices on a single page, I am looking at more dynamic ways of presenting this information in the future.

Until then, I hope you find this version of the summary chart helpful. • 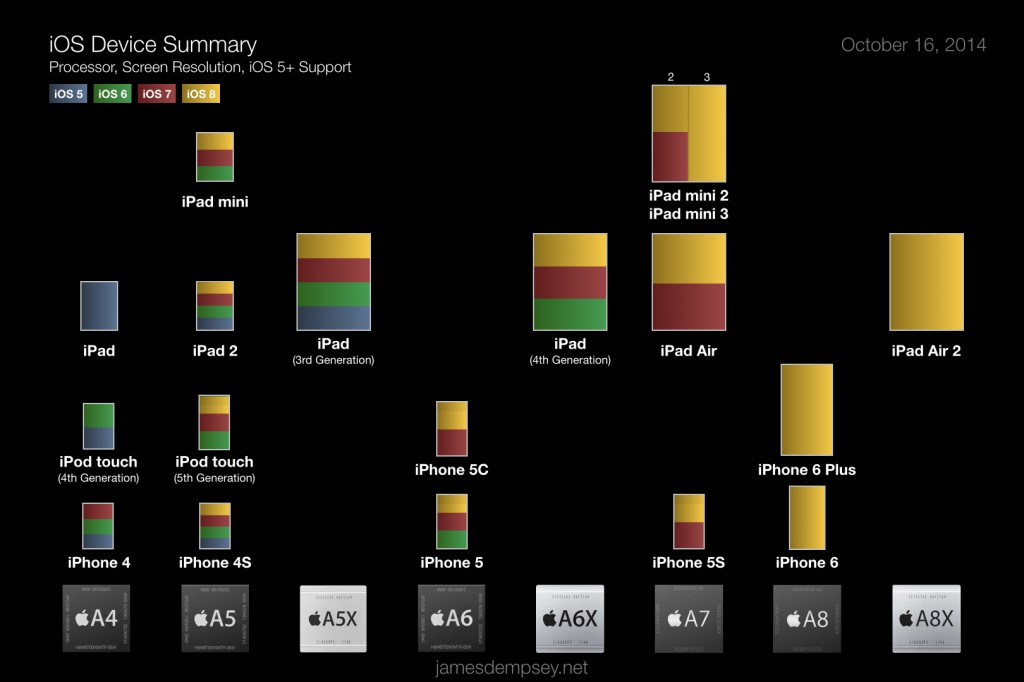 Check out the iOS Device Summary page to learn more and download printable PDFs of the summary.
And check out Backtrace, the only album of iOS and Mac development tunes ever on the Billboard charts.