An Eclectic Breakpoint Jam in Columbus

The 2014 Fall Tour kicked off at CocoaConf Columbus with the most eclectic collection of instruments ever assembled for a Breakpoint Jam.

It was a night for newcomers to the Breakpoint Jam.

Every breakpoint in the house was conditional except for veteran Breakpoint Daniel Steinberg (@dimsumthinking) of Dim Sum Thinking. Daniel, fresh from the latest revision of his new book, A Swift Kickstart, delivered a fantastic keynote before working his slide-advance magic.

Eric Knapp (@ejknapp) of Madison College introduced the crowd to the Chapman Stick playing a solo song before giving familiar James Dempsey and the Breakpoints songs a new twist.

CocoaConf mainstay Will LaFrance (@wjlafrance) made his debut as a Conditional Breakpoint on classical guitar.

Reprising his initial performance in Washington DC last March, Mark Dalrymple (@borkware) of Big Nerd Ranch showcased his talents on trombone on Modelin’ Man and vocals on The Liki Song.

Josh Smith (@kognate), co-author of the recently-released Build iOS Games with SpriteKit, arrived at the conference in the midst of transporting a xylophone across state lines, giving Josh a chance to join in the jam as well.

Thanks to everyone in Columbus, we had a great time and hope you did as well!

The Fall Tour continues in at CocoaConf Las Vegas in September, where James Dempsey and the Breakpoints will make their Vegas debut! •

Don’t miss any of the fun, sign up to get email updates!

I’ve updated my iOS Device Summary for iOS 8 with the info Apple has publicly posted.

A few things to note: 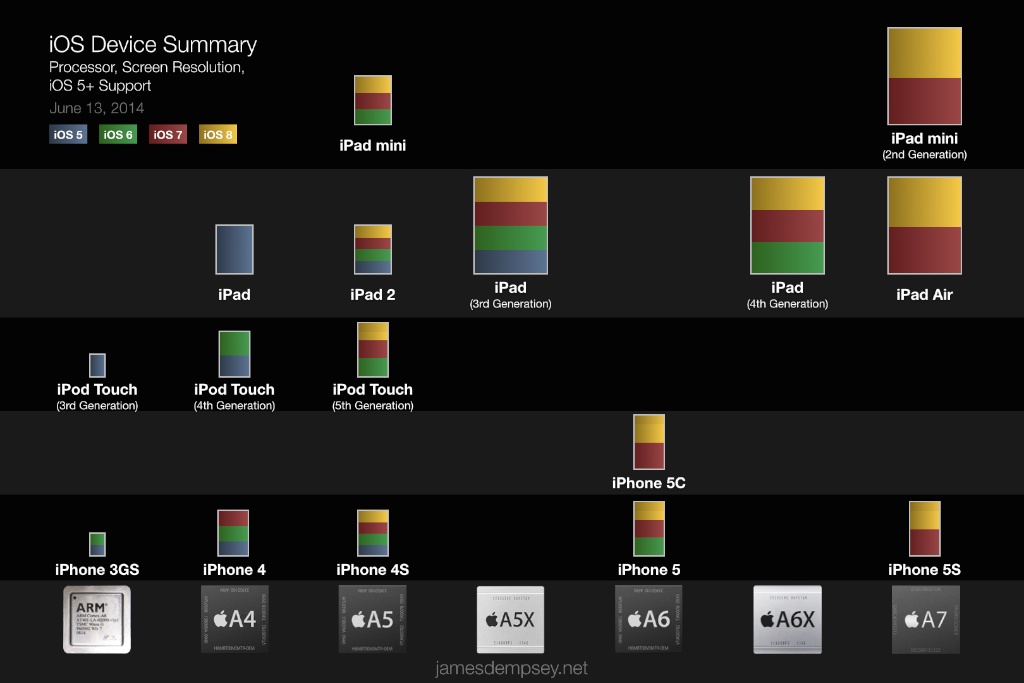 There was no WWDC ticket for me this year, but it was still a very enjoyable and busy week for James Dempsey and the Breakpoints. Here are some of the highlights from last week in San Francisco.

(Interested in the soon-to-be-released James Dempsey and the Breakpoints album?
Sign up for email updates so you don’t miss out on the fun!)

In its third year, this fundraiser celebrates the heritage and history of NeXT, featuring black hardware as well as OPENSTEP and NeXTSTEP running in virtual machines. Even more fascinating is meeting up with folks who lived and breathed this platform from its early days—building apps with the frameworks that would evolve into Cocoa and Cocoa Touch.

As part of the evening’s entertainment, we played a short set of songs in support of the Cartoon Art Museum. If you are a fan of any sort of comics, cartoons, animations and the like, check it out next time you are in San Francisco. If you couldn’t attend the event during WWDC, you can still donate or join as a member.

We had a great time on Wednesday night at 50 Mason Social House. The house was packed as Breakpoints from six different cities in five different time zones across two continents took to the stage to perform a show chock-full of Cocoa-inspired songs.

The evening served up an acoustic guitar sampler with a flight of Breakpoint guitarists—Nathan Eror (@neror) of Martian Craft, Jonathan Penn (@jonathanpenn) of Cocoa Manifest, and Ben Scheirman (@subdigital) of NSScreencast.

The show marked the debut of The Breakpoint Horns with Sam Davies (@iwantmyrealname) of Shinobi Controls on trombone and Daniel Pasco (@dlpasco) of Black Pixel on trumpet playing on Modelin’ Man.

(Any tenor sax players out there for next year? Please let me know.)

Thank you to all of the Breakpoints and also a big thanks to: Luke Scholefield (@lukescholefield), Adam Tow (@atow) and Rae and for taking photos and video; Daniel Steinberg (@dimsumthinking) for recording sound off the board; and James White (@thecolourfool) for running the merch table.

(For more fantastic photos of the show—check out Adam Tow’s photo journal.)

Finally, an enormous thanks to everyone who came out to the show — your support is what keeps this going.  We had a great time this year and hope you all did too!

A Look Back at Alt Conf

On Friday, I presented A Look Back the closing session for Alt Conf 2014.  With the surprise announcement of Swift earlier in the week, the talk took a look back to the beginning of the Objective-C era at Apple, tracing how technologies of that time have evolved into the environment we use today.  To accompany this look back, the talk also featured the first public preview of tracks from the soon-to-be-released James Dempsey and the Breakpoints album.

The technology announcements of WWDC 2014 will have repercussions for us as iOS and Mac developers for many years to come.

Beyond learning about new technologies, the week gives us a chance to gather together and talk, to share ideas, some laughs and perhaps one too many drinks.

Thank you so very much to everyone who came out to see the talk and performances. Your support and feedback is greatly appreciated and means a lot to me—it was fantastic to meet so many folks this year.

With WWDC 2014 now in the past, it is time to turn my attention to finishing up the album and getting it out into the world.  Someone we are all familiar with said “Real artists ship” and that is my next order of business. •

(Interested in the soon-to-be-released James Dempsey and the Breakpoints album?
Sign up for email updates so you don’t miss out on the fun!)

Close Enough To Taste It

This week I reached a milestone that means a great deal to me.

On Tuesday, I finished recording the final lead vocal for the long-awaited James Dempsey and the Breakpoints album.

There is still work to be done—some backing tracks to record, final mixing and mastering of each song—but all the lead vocal and core instrumental recording is now complete.

This album is the realization of a dream fourteen years in the making.

As you might imagine, all of this has me on a sort of euphoric emotional tilt, bouncing from joy to gratitude to relief to excitement and even fear.

There’s a real sense of joy towards the end of a long journey when the destination is finally in sight. An exuberant psychic “Land Ho!” rings out through your entire being.

This journey began with writing that very first song fourteen years ago.  I had always hoped to get the chance to record my material and record it well. It’s been amazing to have the opportunity to take the time to produce a fully realized version of each song.

Listening to the rough mixes, I am incredibly happy with the results!  I usually reserve my exclamation points for tweets and exhortations, but wow!  I am absolutely beaming! I can’t wait to get these tracks out into the world!

I am very grateful to everyone who lent their time and talents to the album. Having the privilege of working with some wildly talented musicians on this effort has been humbling—as has been witnessing them add their own magic to the songs I’ve written.

A dozen or so musicians have contributed to the album. Among them are three who perform on the lion’s share of the tracks: Gordie Freedman (@modenaboy) on guitar, Darren Minifie (@minofifa) on bass and our producer Russell Bond (@russell_bond) doing all sorts of percussion and drums.

Hearing the tracks, it’s often the little things that make me smile the most—a guitar riff from Gordie, a subtle bit of bass from Darren, a drum fill laid in by Russell.  For a sampling, you can check out their handiwork on our single, Almost Dropped My iPhone, but just wait until you hear what they’ve done on the rest of the album!

This milestone also brings with it a sigh of relief—there were a few times when it felt like this project might stop dead in its tracks.

When we first went into the studio back in early 2012, I was very excited to have found a great studio and a great recording engineer and producer: The Annex Studios and Russell Bond. Both already had a long and storied past with Apple and the Mac. (Read more about them here)

Three months into recording, the studio building’s owner dealt a harsh blow.  The building was sold and The Annex Studios had thirty days to vacate the premises.  After a nearly 40-year history, the beautiful space where we were working on the album was suddenly no more.

Our first single, The Liki Song, was the last thing recorded at The Annex Studios before it was dismantled.

This derailed progress on the album, but much more disheartening was watching our friend Russell go through this major upheaval in business and life. And now, a big part of the relief I feel is knowing that he emerged from that tumultuous time with his well-being intact.

As for the album, after a hiatus, we resumed recording at HowlingPoint Studios, high up in the Santa Cruz mountains.  This is Russell’s in-home studio, a much more intimate space. Gone is the giant mixing console, but now Julius the studio cat keeps us company while we make our music.

I know that I won’t breath that last sigh of relief until the album is up on iTunes, but this week I’m feeling great.

It’s an understatement to say that this week I’ve been experiencing a lot of excitement and a healthy dose of fear.

This time of year always gets my adrenaline pumping—anticipating the barrage of WWDC announcements, prepping for the big show on Wednesday night (details here), looking forward to seeing old friends and making new ones.

And now, knowing how close we are getting to release throws all of that into overdrive.  I’m so excited by how it is progressing, it’s hard to contain myself!

My fear is that I will not succeed in getting the word out to the wide world of iOS and Mac developers who might enjoy the fun of this album.  I am very open to thoughts, suggestions or any opportunities to spread the message.  Feel free to tweet them at me or, better yet, email me at info@jamesdempsey.net.

And, of course, when the album is released, if you enjoy it, please don’t keep it to yourself. Let other developers in on the fun.

If you’ve enjoyed these songs in the past, I ask that you please join our mailing list so we can let you know when we cross that finish line and the album is released. I’m really looking forward to getting these songs out into the world, and I think you’re going to enjoy how this all turns out. •

When James Dempsey and the Breakpoints play live near WWDC, sometimes things progress beyond the sweet sounds of nerdy, nerdy music.

Last year, a new event appeared on the conference schedule—WWDC After Dark. A little investigation turned up some interesting results, which, judging from the audience response, the crowd thoroughly enjoyed.

As we get ready for this year’s big show on Wednesday night, June 4th (Full Show Details Here), here’s a little bit of fun from last year’s concert.